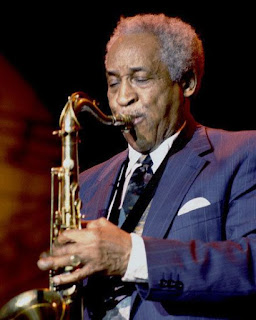 It took me longer than it should have to catch up with the legendary Chicago tenorman Von Freeman, whose 97th birthday would have today: back when he was first on my radar screen he was dismissed in certain circles of the jazz intelligentsia of the day as an interesting regional player whose “dicey intonation” was an acquired taste.

A few Downbeat reviews along those lines kept me from really checking him out until I was assigned some of his recordings to review for The Jazzletter, a quarterly I wrote for a lifetime or two ago.

Once I’d actually spent some time with his playing, I realized I’d been led astray: yeah, his intonation was unconventional, but it was an integral part of an expressive palette that made him a compelling and beautiful player, a unique tenor voice.

In my review of his Southport record “Walkin’ Tuff,” I laid out what I thought was “the case” for Von Freeman’s intonation and how it fit into his playing.

Here’s the relevant part of that review — this is 20-something me having my ears opened wide and getting some new ideas for my own expressive toolkit by a master:

“The first thing that strikes you about Freeman’s playing is his sound. There’s a cry there that brings to mind fellow Chicagoan Johnny Griffin (Griffin and Freeman and approximately a zillion other phenomenal Chicago jazz musicians studied under the legendary Captain Walter Dyett at DuSable High), along with a depth and darkness that recall Dexter Gordon.

“Freeman, however, sounds derivative of no one; he’s strictly his own man. Nowhere is this more evident than in his very personal intonation. He sometimes plays quite sharp or flat, but I swear, he’s never out of tune! This is best demonstrated in his blues playing, as in the opening phrases of the title tune. His ability to play on or off of expected pitch works perfectly in this context, giving his playing a uniquely expressive vocal quality that I’ve never heard in any other tenor player covering Freeman’s bop territory. (In fact, this pitch freedom, coupled with Freeman's use of dense and complex runs that occasionally go to the very limits of what is rhythmically and harmonically possible within a tonal context, give one a sense of the man as a sort of living link between hard boppers and the free-jazz exponents of the next generation.)”

Posted by Kelly Bucheger at 2:53 PM