Don Byas • “All The Things You Are” (Live in Germany) transcription 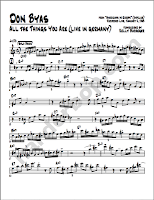 From the Impulse! recording Americans In Europe, recorded live January 3, 1963 in Koblenz, Germay.

PDF
Don Byas All The Things You Are (Live in Germany) transcriptionOver the course of a musical career straddling swing and bebop, after having already toured as a professional musician with name bands before anyone had heard of Charlie Parker, Don Byas readily took on many of Bird’s innovations without obscuring his roots: Coleman Hawkins inspired his robust tenor tone and phrasing, while pianist Art Tatum was his mentor, serving as a role model for his virtuosity and harmonic inventiveness. (Johnny Griffin called him “the Tatum of the saxophone,” and Byas himself said “I haven’t got any style. I just blow, like Art.”)

♫ MP3 ♫
Byas’s solo on
All The Things You AreByas had the chops to play bebop, a technically demanding music requiring fleet fingers and keen harmonic instincts, before there was such a thing as bebop! As that genre emerged, Byas was there, eager and (more importantly) able to sit in with the younger beboppers, and also quick to incorporate their discoveries into his own playing — since, in a way, he was already in their neighborhood.

While he’s appeared on some early sessions that have been hailed as the first bebop (or at least perhaps “prebop”) recordings, his later work reveals a mature player who’d fully integrated bebop into his own vocabulary, so that later Don Byas was indeed an amazing bebop tenor player, and also more than that.

And that’s exactly what this live performance of “All The Things You Are,” recorded in Germany in 1963, documents: double-timing to rival later speed demons like Sonny Stitt or Johnny Griffin; a bebopper’s approach to the changes; and some unique harmonic stuff (Tatum’s influence?) that I’ve never heard anyone else do.

The beginning of this solo illustrates the above: he starts with a blistering two-bar double-time break that commands your attention and tells you something serious is about to happen, then plays an interesting sequence ascending chromatically over the harmony:

(This sequence resolves satisfyingly with the notes D and F on the Bb∆7 chord following the F7.)

This is something he’d worked out: he plays this same lick more or less verbatim a few days later on a live recording of this tune in Copenhagen and, a couple of years before these examples, he delineated the harmonic kernel of this phrase in a studio version of “All The Things” found on the “Tribute to Cannonball” recording:

This results, of course, in some interesting note choices over the F7 chord: C# and E are, to put it mildly, not consonant on that change, but sound cool here because they’re in the context of that chromatic melodic sequence.

But I don’t think that entirely gets at what Byas was thinking. Take a look at m. 29 in this transcription, where he hangs both those notes over the chord without any attempt to “justify” them in a sequence. It’s almost as if he’s substituting an A7b9 here, then “resolving” it by sliding up to the Bb∆7. I haven’t seen that before: is it an Art Tatum trick, a Don Byas trick, or something else? I have no idea — but if anyone out there does, please comment! [POSTSCRIPT NOTE: Older Me finds Byas’s approach here less mysterious than Young Naive Head-In-The-Clouds Me, and I endorse Anonymous’s observation in the comments below: “A7 to Bbmaj7 is a fairly common jazz resolution, Bbmaj7 and Dmin7 are interchangeable.”]

At any rate, this is a great performance by one of the Tenor Masters — and yet someone who isn’t as well known in the States as he ought to be, since he spent most of his professional life in Europe. If you’re a serious tenor player and don’t know Don Byas, you’re not quite serious enough!

Don't have this recording? You can get it from Amazon in the following format:
CD of the album Americans In Europe

Your purchase from Amazon helps to support this blog!
Posted by Kelly Bucheger at 11:46 AM 2 comments: