A review of “Ernie Krivda Jazz” 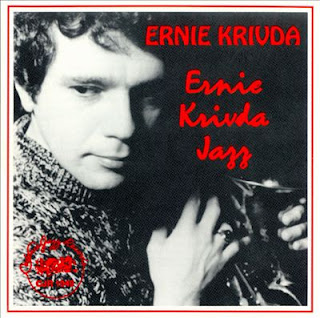 I’m firing up the mighty blog again, after a bit of a pause. Amongst other things, I’d like to put up some more of my published reviews and articles from Midwest Jazz — stuff that might be of interest to that vast portion of humanity that seeks out jazz blogs: these articles are for all nine of you! Stay alive! I need the hit count!

Midwest Jazz was published by Arts Midwest, a non-profit regional arts organization based in Minneapolis. I worked there, starting as a receptionist and progressing through office manager and finally program associate. Arts Midwest is where I got my first chance to write about jazz and actually get paid (a little bit) for it!

Midwest Jazz (still called the Arts Midwest Jazzletter back in 1992, when I wrote the following review) covered the jazz scenes in the 9-state upper Midwest region served by Arts Midwest. And that’s how Cleveland-based saxophonist Ernie Krivda’s Ernie Krivda Jazz came my way for review.

I’d already heard of Krivda — he’d made a splash nationally with a number of highly-regarded recordings for the Inner City label — but somehow I’d never actually gotten my hands on his records.

I was looking forward to finally checking him out, but there was a problem: by the time I had a chance to listen to the disc, I was already late in submitting the review! When I mention that “I’m past deadline and Jones is breathing down my neck,” the Jones in question was editor Dawn Renee Jones, and I wasn’t kidding!

Meanwhile, Krivda’s very original playing and composing meant I couldn’t rely on some tried-and-true strategies usually suitable for cranking out a quick review, as you’ll read below...

(By the way, in the more than 20 years since writing this review, I’ve heard lots more Ernie Krivda, both on record and several times live. He remains a thrilling and amazing player, and I have a very specific take on “where he’s coming from” now that I hope to put to pixels one of these days. Also, when I wrote this, I had no idea that one day I’d work and play with monster bassist Jeff Halsey, cited below, at Blue Lake Fine Arts Camp!)

Here we go...
This article appeared in the
Arts Midwest Jazzletter
Summer 1992 (Vol. 10, #3),
an Arts Midwest publication.
Reprinted with permission.
Everything tastes more or less like chicken, the saying goes, and there is a related concept in jazz: “every tenorman plays more or less like _____________.” The name you put in the blank depends upon what decade it is: nowadays it’s Michael Brecker (by state law), and before that it was John Coltrane (who Brecker played more or less like, once upon a time), Sonny Rollins, Lester Young, Coleman Hawkins. It’s important, and probably should be mandatory, that tenor players follow these strict guidelines, lest reviewers be forced to deviate from the tried-and-true “he plays like so-and-so” formula. O.K., so I’m writing this review of Ernie Krivda Jazz, I’m past deadline and Jones is breathing down my neck, and Krivda is breaking the rules. He’s a tenor player, so it’s my duty to shoehorn him into the appropriate category: he’s in the modern improvising tradition, and shows a fluent mastery of the post bop idiom, with an original and expressive approach. But who the hell does he sound like? Maybe Ernie Krivda?

Ernie Krivda Jazz is a great way to sample Krivda’s work as a solid improvisor and composer. The disc captures Krivda in a variety of settings, leading off with a quintet featuring Pete Selvaggio on accordion! Krivda’s “Old Vienna” is a nice, rambling, dramatic “old world” tune, very difficult to describe but vaguely reminiscent of the sort of stuff Bulgarian Ivo Papasov does, without the crazed metric shifts.

“Irv’s At Midnight,” a funky shuffle featuring a nice tenor & bone line, is another tune featuring the accordion. If you’re one of the seven people who haven’t yet heard that the accordion has undergone a political rehabilitation, and is now considered a very hip instrument to jam with, check out these two tunes. At times Selvaggio’s squeeze-box has the plaintive wail of a Toots Thielemans harmonica solo; other times it sounds like a pocket Hammond B3. It’s very effective in this context, and Krivda’s use of the instrument in these two tunes is intelligent and appropriate — it’s not a gimmick, but rather an integral part of the group sound.

“The Bozo” is the most compositionally ambitious offering of the set, adding two trumpets to Krivda’s tenor and Pat Hallaran’s trombone. Krivda blows a loose, inside-outside solo, filled with effortless, skittering arpeggiated forays into and out of the altissimo register. Guitarist Bob Fraser plays a nice meaty solo (one of his many excellent contributions to this disc) before the horns take over with a complex, theatrical interlude. Good stuff.

Next come three exquisite duet performances between Krivda and bassist Jeff Halsey: “Autumn Leaves,” “Blues For Two” (an original), and “Over The Rainbow.” Halsey plays with a fat, warm sound, and Krivda is alternately lyrical and intense, soulful and aggressive. These two virtuosos play with a high degree of empathy, and their collaborations here are completely satisfying.

The remaining four tunes alternate between Krivda’s quartet and quintet. “The Song Is You” features more nice blowing by Krivda and Fraser; Krivda’s “In Pursuit Of Hip” is another effective use of the tenor/bone front line; “Little Face” is a jazz waltz original with a nice cadenza ending; and “Love For Sale” closes off the disc with a bluesy, unconventional arrangement.

Since Krivda defies pigeonholing, we’re forced to accept him on his own terms. I can’t tell you who he sounds like; I can only say he’s a master improviser playing in a unique, original style. You should pick up this disc and find out about Ernie Krivda.