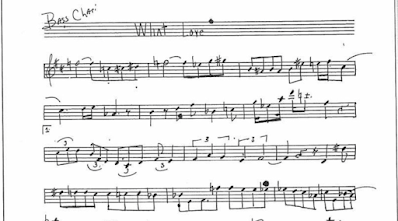 (Charles Mingus was born 100 years ago today. He’s a musical hero of mine, and although I never got the chance to hear him live, I still have some of my own weird Mingus stories. Here’s one of them…)

Early in 1990 I attended a lecture by perhaps the top Charles Mingus scholar of the day, at the International Association of Jazz Educators Conference in Miami. He was discussing his upcoming Mingus fakebook, the first authorized and legitimately published collection of Mingus compositions, a new volume dedicated to documenting the composer’s work with more detail than the normal barebones schematics of a fakebook, and with historical context for the music.

I wanted to hear this man speak because I was obsessed with Mingus. I devoured every Mingus record I could find, and everything I could read about him, including articles by this scholar: Mingus revealed to me (and to all of us) that jazz could go to impossible places we hadn’t thought of until he took us there. I was a young and aspiring jazz composer, and Mingus broke my world. I needed to know everything about him.

During the lecture, a galley proof for this new fakebook, which wasn’t available yet, made its way around the room. When I got my hands on it, I immediately turned to What Love, one of my favorite Mingus compositions: I wanted to see how they would depict the tune’s crazy goings-on as a lead sheet. (To this day I’m always looking at other jazz composers’ lead sheets to learn new and better ways to express my own musical ideas.)

As I was scanning the book’s narrative about the tune, I read this: “In the Mingus Archives, two pages of What Love have been found which bear little resemblance to what was played on the recordings (see the reproduction on the following page).”

I turned the page and was ASTONISHED to instantly recognize, in handwritten notation, the insane counter-melody that Eric Dolphy plays during certain repetitions of the head — a counter-melody so angular and weird and unlike the melody that the first time I heard it I assumed that Dolphy was improvising it on the spot, until I heard it recur on other recordings.

Then I realized: Holy Shit, The Scholar Got It Wrong, this book made it all the way to galley proofs and NOBODY caught this thing that I, a dumbass 20-something jazz nerd from Minneapolis, instantly spotted! I reluctantly passed the proofs to the next person impatiently waiting their turn with them, and thought to myself “OMG I have to let him know before this goes to print!”

After the lecture there was a line of folks waiting to speak with The Scholar. When my turn came I told him I was looking forward to buying the book, but that I’d noted in the copy making the rounds during the lecture that there was an error regarding What Love. I nervously and semi-manically blurted my findings.

He was nice to me but seemed a little uncomprehending. He assumed, and was almost certainly correct, that I was one of the standard issue jazz weirdos that make the rounds of jazz gigs and events, and that this random person standing before him couldn’t have spent 2 minutes with the galleys and have spotted this sort of error. He said that was surprising, thanked me and moved on to the next person.

A year later, when I bought the published book, the error was intact.

Posted by Kelly Bucheger at 12:05 PM No comments: