Dexter Gordon • “There Will Never Be Another You” transcription 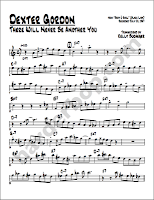 From the Black Lion recording Body & Soul, recorded July 20, 1967.
PDF
Dexter Gordon
There Will Never Be Another You transcriptionThere’s no law requiring bars 3 and 4 of There Will Never Be Another You to be a minor ii-V (Em7b5 to A7b9 in tenor key) leading into the minor 7 chord in bar 5. If there were, Dexter would be risking jail time and a fine in this performance, as he frequently (but not always!) plays these changes as Em7 to A7 (or Em9 to A9).

♫ MP3 ♫
Gordon’s solo on
There Will Never Be Another YouIt’s not a trivial difference! To ears accustomed to the traditional, way-it’s-always-done, God-ordained “normal” progression for this tune, the onslaught of F#s and B naturals sounding in these two bars comes off as some sort of ear-cleansing, hip and “out there” substitution. But nope, it ain’t: it’s just a wholesome ol’ plain-as-pie ii-V, but without the “traditional” half-diminished and flat-nine spicing.

Related PostsThis recording is from a live date at the Montmartre Jazz Club in Copenhagen in the late Sixties, with an illustrious rhythm section of ex-pats Kenny Drew and Tootie Heath, along with Danish ringer (let’s make that über-ringer/monster) Niels-Henning Ørsted Pedersen on bass. These sessions, from the London-based independent jazz label Black Lion, aren’t as well-known as Dexter’s releases on Blue Note or Prestige — and that’s unfortunate, because these discs feature top-notch, fleet-footed Dexter at his swaggering behind-the-beat best. (“Fleet-footed” AND “behind the beat”? MUST be Dexter!)

Here we have 8+ choruses of how-it’s-done-boys-and-girls bebop improvisation over one of the most common tunes called on a jazz gig. What more is there to say? Horn in your hand? On your mark, get set...

Wait! Actually, there is a bit more to say about some of what Dexter’s up to here:


But: we do have this wonderful performance! Here, Ladies and Gentlemen, is how a Master would play There Will Never Be Another You.

CD of the album Body & Soul

Your purchase from Amazon helps to support this blog!
Posted by Kelly Bucheger at 9:43 PM 12 comments: