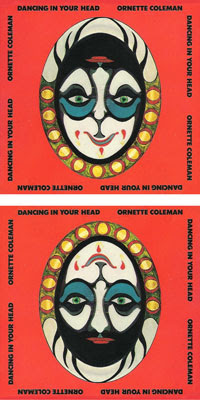 I first encountered the term “harmolodic” in the liner notes to Ornette Coleman’s Dancing In Your Head LP. The record was one of those gorgeous Horizon gatefold releases that even smelled good — that “new record smell” has so far resisted digital reproduction and is not yet available on iTunes. The striking front and back covers featured a stylized African mask that was also a sort of optical illusion: flip the cover upside down and you had another mask. Depending on the mood of the person stocking the bin at the record store, you might encounter the new Ornette album sporting a mischievous smiling jester, or the exact same album showing a pensive, robed wise man with a full beard.

The music was thrilling and baffling, and unlike any other Ornette record I’d ever heard: a taunting, singsong melody is repeated a shocking number of times over a twangy electric rhythm section that appeared to have gone insane.

That was the A-side. Flip the record over and ... it wasn’t just deja vu — it was more like deja what the fuck: the same maddening thing, the same melody, the same guitars, everything the same and somehow different, happens all over again! The topsy-turvy same-slash-different album cover was the perfect metaphor for the music on the record.

Turning to the liner notes for context and understanding, I found Ornette’s explanation: the music on the record

was written and arranged by means of a musical concept I call harmolodic. This means the rhythms, harmonics and tempos are all equal in relationship and independent melodies at the same time.

Over the years, I’ve seen that I’m not the only person beguiled a bit by the term (which nowadays usually sports a terminating s as a noun: “harmolodics”; and no s as an adjective: “the harmolodic concept”) — musicians and jazz scholars have grappled with the word and the theory, trying and failing to pin down its exact meaning and implications.

Related Post
Even players with longtime connections to OC seem to have reached different conclusions: guitarist James Blood Ulmer called harmolodics “a concept that everyone should explore,” while Ronald Shannon Jackson, the drummer on Dancing In Your Head, doesn’t think the term has an exact meaning.

I think Jackson is right: in fact, the more precise the definition, the less persuasive it is! In a 2003 Guitar Player interview, Ulmer seems about to reveal a tantalizingly concrete description of the concept, when he’s asked to explain what is a “harmolodic chord”:

Wow! We’re on the cusp of enlightenment! The interviewer asks the only possible follow-up question: “Which five are those?”

Ulmer’s response snatches the pebble out of our hand:

I don’t want to get into it because it would take all day to discuss those five chords.

The Grove Dictionary of Music tries to set forth the known knowns:

[I]t apparently involves the simultaneous sounding, in different tonalities and at different pitches [...] but in otherwise unchanged form, of a single melodic or thematic line; the procedure produces a type of simple heterophony. [...] More generally the harmolodic theory espouses principles already well established in free jazz, namely equality among instruments (rather than the traditional separation between soloist and accompaniment) in harmonically free collective improvisation. According to Ronald Shannon Jackson, a member of Prime Time, the term derives from a conflation of the words “harmony,” “movement,” and “melody”; Jackson has also stated that, in his opinion, the term has no precise musical meaning.

one of the profound systems today for both Western and Eastern music. [...] When we would play a composition, we could improvise forms, or modulate or make cadences or interludes, but all listening to each other to see which way it was going so we could blow that way. Ornette’s harmony would end up being a melody and the original melody would end up being a harmony. So he could continue on that way to write for a whole orchestra, starting from the first melody which ends up being harmony to the harmonic melodies that come after the main theme.

However, in a Downbeat interview excerpted in John Litweiler’s Ornette bio, Cherry provides a definition that for me feels both precise and yet somehow also makes perfect sense (!):

If I play a C and have it in my mind as the tonic, that’s what it will become. If I want it to be a minor third or a major seventh that had a tendency to resolve upward, then the quality of the note will change.

This suggests an approach where the logic of a melodic line dictates the group interactions to that line. Bernie Nix, who played with OC for more than a decade and is one of the guitarists on Dancing In Your Head, nods in this direction in an interview on All About Jazz: “The harmony doesn’t dictate the direction, the melody does.”

That might be enough of a definition for me. As for whether that really gets at what Ornette has in mind when he invokes the term, I’m thinking: not even close! Sound engineer Oz Fritz recalls meeting with Ornette, and says “Ornette mentioned that he'd never had an album of his recorded to his standard of Harmolodics.” What he says next astonishes: “Ornette mentioned that he’d never even heard a harmolodics recording except for one rehearsal recording by Frank Sinatra which no longer existed.”

Was Ornette pulling his leg? Fritz didn’t seem to think so.

Don’t have this classic harmolodic recording? You can get it from Amazon as an MP3 album:

Dancing In Your Head