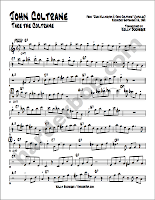 From the Impulse! recording Duke Ellington & John Coltrane, recorded September 26, 1962.
PDF
John Coltrane
Take The Coltrane transcriptionThis is an amazing blues performance from John Coltrane’s celebrated meeting with Duke Ellington. Around the time of this recording, many in the jazz press, including some usually perceptive and open-minded writers, couldn’t “hear” Trane: they found his sound harsh and his lines angular, unswinging, and abstract. Meanwhile, some lesser writers cursed his output as anti-jazz, angry noise that threatened to eclipse and even destroy real jazz.

♫ MP3 ♫
Coltrane’s solo on
Take The ColtraneBob Thiele, the head of Coltrane’s new label, Impulse!, astutely decided to counter the bad press by positioning his new artist as a player firmly in jazz’s mainstream, first by getting the Duke’s “seal of approval” in a collaboration, followed by an ear-friendly album of ballads.

Coltrane’s solo on Take The Coltrane, an Ellington riff penned for the occasion, is a yin-yang study in tension and release: knotty dissonant phrases are juxtaposed with bright, sing-songy consonant motives. The tension he creates with this approach is unsettling, like watching an artist paint swatches of cheerful primary colors onto a smoldering canvas about to burst into flames. (Ellington lays out during the solo, giving Coltrane room to air out his ideas.)

Harmonically, Trane uses a few regular strategies to move from dissonance to consonance, always with an ear toward making strong resolutions at the “big spots” in the form: in the last 4 bars of the chorus, he might play outside the changes entirely, and then firmly resolve into the harmony again to lead into the next chorus. Here are examples from mm. 69-73 and 92-97:

More typically at bars 3 & 4 in the form he’ll play a tritone substitution resolving into bar 5; here’s an example from his 2nd chorus (see also choruses 3, 4, & 8):

Trane’s forays outside of tonality seem more dissonant and intense because they are often resolved by simple and unambiguous diatonic motives, like this very consonant “triad-pairesque” line from his 2nd chorus:

Whatever Coltrane is up to, here’s the thing: this solo is a blast to play! From a technical standpoint it’s actually simpler and more approachable than many of Trane’s outings — there are no sheets of sound here, no intensely technical passages that defy normal, mortal fingers! If you’ve ever worked on a Trane solo and thought to yourself “I’ll never be able to play this...,” here’s one, as amazing and deep as it is, that might actually be coaxed from your horn after a bit of shedding...

(A note about the chord changes in this transcription: these are intended more to delineate the form and provide a possible context for Trane’s blowing. These changes do not always reflect Garrison’s bass lines, and do not even necessarily reflect Trane’s actual intentions: the blues is an incredibly fluid and flexible framework for blowing, and Trane was a master at pushing its limits even further! In several cases here there are multiple ways to interpret the harmonic context of his lines; the changes on this transcription provide one viable and hopefully straightforward interpretation...)


Don't have this classic, must-have recording? You can get it from Amazon in the following formats:

Instant MP3 Download of the track Take The Coltrane

Your purchase from Amazon helps to support this blog!
Posted by Kelly Bucheger at 10:18 AM No comments: