I put those “Truck Ballz” on my tenor and OMG THE SOUND!!!!

I posted this a few years back on the Sax On The Web site, and I guess because it’s kind of “racy” it ended up banished to the “Members Only” section, lest wholesome, innocent, convent-raised youths be permanently scarred by what you’re about to read.

A preamble: the folks on SOTW run the gamut from band kids to enthusiastic amateurs to weekend warriors to saxophone collectors to pros to Pros Whose Names You’d Even Know. A lot of the discussion is very gear-heavy, and there’s a certain cohort that is always seeking to improve their sound not via the traditional route of long tones or hours in the shed with the sax on their face or whatever, but instead by “putting stuff on” or “doing stuff to” their horns: freezing them, or attaching “resonance stones” or this weird spoon-like doohickey or even just big metal lumps (photo below) on crucial spots OUTSIDE the horn (some manufacturers are even doing this), or removing lacquer from the neck, and on and on and on.

I haven’t tried these, so perhaps I‘m unfair with my skepticism. However, when one poster swore that tying a small length of leather cord around his horn’s neck focused and enhanced his tone, I snapped — resulting in this account of my own groundbreaking work in this area: 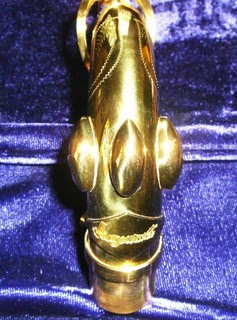 ...and for some reason it made me think of those Truck Ballz that dangle from the rears of pick-up trucks of Particularly Distinguished Individuals.

However, I was afraid to make a permanent mod on my vintage Mark VI tenor without even knowing if it would work, so I decided to try a controlled experiment first: I installed them on the back of my ’95 3-cylinder Geo Metro.

I can only assume it acted as some sort of spoiler and reduced turbulence and stuff, because the car felt peppier and, though I haven’t had a chance to fill the tank yet, I believe it improved gas mileage.

Once I saw that that worked, I felt better about putting one of these suckers on my tenor. 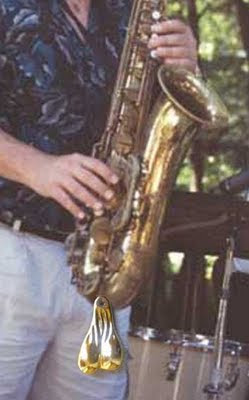 Here’s what I noticed: first, that famous Mark VI core sound — well, man, it just got plain corier, I guess is how I would put it. Folks I play with noticed it right away — I could see, they were pointing at the horn and stuff, and I think the core was just like friggin’ drilling a hole into their brains!

The horn felt more free-blowing and powerful, from a low Bb all the way up to altissimo D9 (after D9, some notes were harder to lock into, but it was worth the trade-off...), from a whisper to a roar. The horn now has a husky, smoky, bluesy sound that I really like.

Intonation seems better too, except for middle-D, which is sharp.

Now I find I move around more when I play, and they kind of dangle and sway and flop around down there, and I like that.

There have been some drawbacks. I've been experiencing bouts of “gig rage”: if I think the guy soloing before me is taking too long or isn’t double-timing enough, I’ll follow with my solo probably too closely, or might even cut him off. If I feel like the piano player plays a chord voicing that disrespects me, I give him the finger.

Also, I now need to find a case that fits the horn. (The horn dresses to the right, so that’s a consideration....)