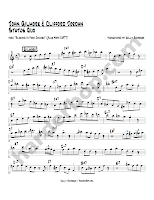 ♫ MP3 ♫
Gilmore & Jordan’s solos on
Status QuoJordan would later distinguish himself with notables like Max Roach and Cedar Walton. For me, his work with Mingus is a high point, and his intense and even spine-tingling blowing on Right Now: Live At The Jazz Workshop makes that recording a "desert island" pick for me. (I also think he's unfairly overlooked as a composer — his fine hard bop tunes are as worthy of revisiting as Hank Mobley's stuff.)

Gilmore is best known, of course, for his work with Sun Ra, and it's often said that John Coltrane regarded him highly and even took some lessons from him.

Related PostGilmore blows first on this track, Status Quo (based on the changes to There Will Never Be Another You), and it's interesting to hear him at this very early point in his career (Blowin' In From Chicago was his first recording as leader — as it was for co-leader Jordan): unlike the interplanetary voyages he would later undertake with Sun Ra, his playing here consists instead of fine bread-and-butter bebop lines that are well-executed but entirely earthbound.

Jordan follows Gilmore, with a bigger sound and more than a hint of Dexter Gordon in tone and time feel. While his lines differ from Gilmore's, they're also strictly from the bebop playbook.

This transcription offers idiomatic straight-ahead bebop vocabulary from two young players who had this stuff fully under their fingers, and who'd go on to develop distinct and compelling voices of their own.

If you dig the sound clip, you'll love the entire recording of this hard bop classic! You can get it from Amazon in the following formats:

Instant MP3 Download of the album Blowing In From Chicago

CD of the album Blowing in From Chicago

Your purchase from Amazon helps to support this blog!
Posted by Kelly Bucheger at 2:19 PM No comments: