Eric Alexander • “Blues For All” transcription 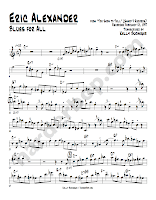 From the Sharp Nine recording Too Soon To Tell, recorded February 25, 1997.

PDF
Eric Alexander
Blues For All transcriptionAlthough Eric Alexander is a nearly perfect human tenor saxophonist — his sound, time feel, articulation and execution on the horn are exemplars of human saxophone playing — I absolutely can imagine being able to play like him: if I spent ten years in some sort of saxophonist monastery where my meals were prepared for me and I was able to put the horn on my face for 8-12 hours a day, under the guidance of nurturing and wise sax master monks, I can see myself emerging at the end of the retreat playing the horn and executing Alexanderish lines with his flawless poise.

♫ MP3 ♫
Alexander’s solo on
Too Soon To TellIn that regard, I differentiate him from post-human, freak-of-nature saxophonists like Chris Potter and Donny McCaslin: guys who, whether as the result of prenatal exposure to gamma radiation or an X-Fileish intermingling of human and alien DNA, play and think on the horn in ways that are demonstrably non-human, and where no amount of monastic sequestration would ever enable me, a human, to play like them. 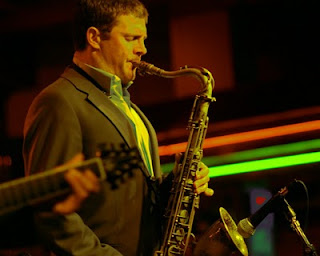 This photo of Eric Alexander is by Dave Kaufman, and is used with his kind permission. Check out Kaufman’s other great shots at his
All About Jazz photo gallery.
(However: as I further ponder my important and groundbreaking hypothesis here, it’s worth noting that Alexander was already a freakishly great player at a young age, so I’m not entirely vouchsafing his credentials as a human: it’s conceivable he’s some sort of kinder & gentler alien spawn who has chosen to focus on aspects of saxophony that us lesser species might still aspire to. Without blood tests and dissection, there’s really no way to know.)

Anyways, where was I? Oh yeah: Alexander started out intending to be a classical saxophonist, discovering jazz only after going to Indiana University to study with the legendary classical saxophonist Eugene Rousseau, and I have to wonder if Alexander’s “legit” (crummy term, but what can you do?) roots play a part in his refined technical mastery of the horn.

Whatever: his 7 choruses on this C minor (tenor key) blues offer a nice demonstration of getting a lot of mileage from simple motivic devices; succinct use of the altered scale to set up quick tension/resolution speed bumps; basic chord superimpositions to increase harmonic interest; along with a few curveballs in the form of some unusual melodic devices.

Let me point out specific examples of the above:
Okay, so that’s all there is to it: just master all this stuff, have perfect chops and a perfect sound, and you’ll play just like Eric Alexander! (By the way: for just under a ding-dang buck you can download this track from Amazon — and then, using that track with this transcription, it’s like having a little mini-lesson with Eric Alexander for a buck! Why would you not do that? I’ll also point out that the album Too Soon To Tell also has the most unexpectedly hip 3-horn arrangement of Alfie you’ve ever heard, and you can download the whole album for peanuts, so what the heck?)


Don't have this fine recording? You can get it from Amazon in the following formats:
Instant MP3 Download of the track Blues For All

Instant MP3 Download of the album Too Soon To Tell

CD of the album Too Soon To Tell

Your purchase from Amazon helps to support the artist and this blog!