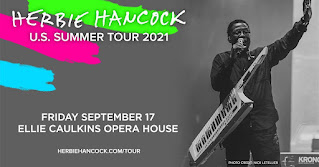 I’d seen some clips of previous gigs from this tour on social media before last night’s concert, and based on those I was worried the musical fare was going to be jams on, er, let’s just say “well-worn chestnuts” like Chameleon and Watermelon Man. I thought that maybe Herbie was going to rest on his laurels and coast a bit on this tour, and dammit he’s earned that and it would still be a thrill to hear him live for the first time.

I got it entirely wrong. Chameleon and Watermelon Man DID make an appearance  — during the encore: and that also seemed to be when most folks pulled out their phones to grab something to post, skewing the “data set” of what’s happening on this tour!

Instead, the scope of this group’s musical ambitions was impressive: beautifully orchestrated, compelling arrangements of stuff familiar and new, not just “playing the hits” at all, and showcasing the considerable talents of the individual players. It didn’t quite sound like anything I’ve heard before, and I was blown away by how mature the ensemble sounded — not at all like a pick-up band or whatever…

Something else struck me last night that I’m trying to work out, something I’ve noticed before.

Herbie was already one of the most important and celebrated of his generation of jazz pianists as synthesizers emerged, and like Chick Corea (and NOT like Keith Jarrett) he took the new electronic instruments seriously, spent time with them to unlock their secrets, and developed a compelling voice on them.

However, no instrument in his large arsenal on stage last night sounded more “modern,” to my ears, than that big ol’ grand piano! He’d be cooking on this or that other thing and sounding great, but when he turned to that grand piano, THAT instrument at THAT moment was the freshest and hippest sound in the universe.

I have a couple of thoughts as to why that might be. First, acoustic piano is truly Herbie’s native language. He’s entirely fluent on the other instruments but, I mean, your native tongue is your native tongue!

And maybe that’s why, to my ears — and I may be full of shit, and this is gonna sound corny as hell: but hearing the grand was like taking in the wisdom and gravitas of a wise elder who’s seen it all and can still show these synth whippersnappers what it’s really all about.

If you want an example of what I’m talking about — perhaps so that you can assess for yourself my precise level of full-of-shittedness — check out Herbie’s fabulous ’70s funk/fusion tune Hang Up Your Hang Ups: after a blizzard of amazing synthesized funk, Herbie closes the tune with soaring acoustic piano solo — and dammit I assert it’s the freshest damn sound you’ve ever heard!

We’ve all experienced acoustic piano in so many contexts, from Bach to ragtime to stride … Schubert and Debussy and Bill Evans and Jaki Byard and Cecil Taylor and on and on and on — and we’ve likely even banged out our own melodies on one, at varying skill levels, at some point in our lives — and yet somehow it is still fresh, it still surprises. How is that possible? What an amazing instrument.

One last thing: in this impressive band the flutist Elena Pinderhughes, a younger player I’ve literally never heard of, stood out: a killer combo of beautiful sound and a compelling modern vocabulary. Folks are gonna know her name, I think…

Posted by Kelly Bucheger at 12:20 PM No comments: