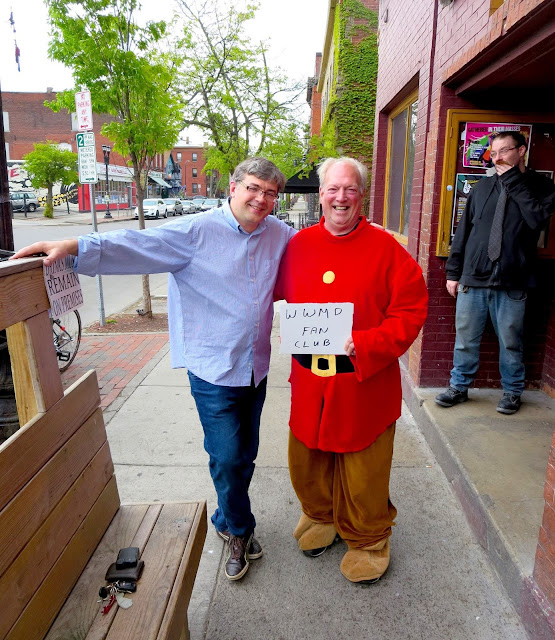 I’m not going to get this right, but I’m trying to remember the time Bill Walsh shared a cab with John Scofield and Jack DeJohnette, I think it was, and they spilled some juicy gossip about John Abercrombie, with whom they were quarreling. Or when Bill used to hang out with Dave Liebman, when Liebs was going through a divorce and was somehow living above a pizza joint in New Jersey. Or rather, I’m trying to recall the details about the time that Sam Rivers and band sang “Happy Birthday” to Bill, while Rivers’ kids were propped on Bill’s knees.

And I’m trying to understand how every time I discovered some new-to-me “niche” jazz artist who suddenly rocked my world, Bill would not only have astute recording suggestions for this supposedly obscure person, but would likely even have vivid recollections about catching them live.

Somehow, once I’d categorized Bill as perhaps the heaviest “civilian” jazz nerd I’ve ever met, he revealed himself to also be a heavy civilian new music nerd, with as many stories about, say, Fred Rzewski and George Crumb as about anybody else.

I’m incredibly honored that Bill was a regular at my gigs. He’d accusingly point out performances he was missing to catch mine, as if I’d intentionally caused a scheduling conflict.

Bill called himself the founding member of the What Would Mingus Do? fan club. I took the photo above: Bill with Tim Clarke outside of Nietzsche’s. Here’s what I wrote about it at the time:

People: Bill Walsh wore this to yesterday’s What Would Mingus Do? performance at Nietzsche's JazzFest Day V. Let that sink in for a moment.

Bill is sporting a prototype of our Brand New Official What Would Mingus Do? Fan Garb. Some people, haters, might say that Official What Would Mingus Do? Fan Garb kind of looks like a repurposed Santa suit, to which I say: EVERYTHING “kind of” looks like something else: clouds “kind of” look like cotton balls; peanut M&Ms “kind of” look like the delicious turds of a Magical Rainbow Bunny — THAT’S NOT THE POINT — the point is that Bill wore his WWMD? Fan Garb in Nietzsche's and NO ONE batted an eye or remarked upon it or in any way responded with surprise.

1) Nietzsche’s offers a non-judgmental, open-minded environment where you can just live your damn life in peace, and

2) they should really turn the lights on in there some time, so you can see what people are wearing and be appalled.

Don’t judge Bill until you’ve walked a mile in his shoes: and ohmygawd LOOK at those fuggin’ shoes! (A couple of other things: our new Official What Would Mingus Do? Fan Garb is made of a breathable fabric that is not itchy at all, as long as you have a high tolerance for itchiness and have taken a lot of Benadryl. Also, down the road we’re looking at making a fancier fan club sign.)


The fact that Bill showed up in that outfit tells you a lot about his sense of humor, and his sweetness: he was a big, absurd, sweet person.

Bill was first admitted to Kenmore Mercy in March, I believe. When I visited him back then he looked spent — but there was a vibe that, yes, he’d been through a ton, but he was on the mend and would soon be back on the gig circuit, scolding me about scheduling conflicts.

When I stopped by his room, he was doing exactly the sort of thing you’d expect Bill Walsh to be doing: he was reading Maxine Gordon’s new Dexter biography. He highly recommended it.

He also hipped me to some Carla Bley bootleg recordings newly available on Amazon, and said I should make a point of grabbing Amy Beal’s biography of Carla. (The book is sitting next to me as I’m typing this…)

Eventually Bill was indeed back on the scene, and he’d routinely send me teasing Facebook messages that he was catching more stuff than I was, which is absolutely true, since Bill was downright competitive in keeping count of the gigs he’d been to, while I’ve lately been on a semi-monastic reclusive stretch.

When I would run into him at this or that gig, he looked happy, but he also looked uncharacteristically tired.

I was in Boulder with family last week when I’d heard Bill was back at Kenmore Mercy. That’s all I knew at first, but then it appeared that Bill was very sick, that this was very serious.

At some point in the last day or two it occurred to me that I might have to write this goddamn note.

And just now I’ve had that sad news confirmed, so here’s my unwilling tribute to Bill Walsh, my friend and a friend of jazz and progressive music (and Irish music!) in this town. I didn’t want to write this, because it means that nobody will ever again wear that absurd suit, and obviously no one else could possibly fill those huge crazy shoes…
Posted by Kelly Bucheger at 6:24 PM No comments: