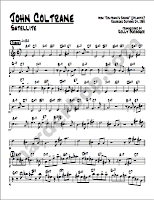 From the Atlantic recording Coltrane’s Sound, recorded October 24, 1960.
PDF
John Coltrane
Satellite transcriptionIn February of 1959, at a recording session in Chicago featuring the sidemen of the Miles Davis Sextet, John Coltrane used a novel harmonic approach while soloing on the old jazz chestnut Limehouse Blues. This was the first recorded instance of “Coltrane changes.” Instead of obediently marching through the circle of fifths in the manner of most jazz standards, Coltrane's chord progression/substitution scheme featured the exotic sound of descending major 3rd root movements.

About two months after that Chicago session, Coltrane was in New York laying down the first exploratory tracks for what would become a showcase for his new harmonic discoveries, the album Giant Steps. That album put Trane changes front and center, displaying his rigorous and even astonishing mastery of them. (These changes require serious shedding to “get under the fingers” — in fact, none of the work from that first day appeared on the album, in part because the rest of the group, seasoned pros like Cedar Walton, were having difficulties with the harmonic minefield presented by the new progression.)

In a way, Coltrane’s work on Giant Steps represented a logical (and even extreme) culmination of the implications of “vertical” (harmonic, change-based) improvisation, an approach that seemed especially well-suited to Coltrane’s technical command of his horn.

Amazingly, in the same months he was working on Giant Steps, Coltrane was recording an album with Miles Davis that featured another new harmonic approach — an approach that amounted to nearly a rejection of vertical improvisation!

Kind of Blue was a modal jazz “shot heard ’round the world” among jazz musicians. On So What, the album’s opening track, one chord is played over the first 16 bars, a nearly absurdly static harmonic pace compared to the typical jazz standard or bebop tune of the day — or, especially, compared to Coltrane’s Giant Steps, where 26 chords come and go in the same number of bars.

The modal approach of Kind of Blue represented a milestone in “horizontal” (melodic) improvisation, and highlighted Davis’s strengths as an improviser in the same way that Giant Steps highlighted Coltrane’s.

And yet, Coltrane met the challenge of Kind of Blue beautifully. His solos, sweeping, urgent and lyrical, are excellent foils for Davis’s much sparser but no less compelling statements. But nowhere on Kind of Blue does Coltrane use Trane changes!

While his near-simultaneous work on Giant Steps means that during the Kind of Blue sessions Coltrane undoubtedly had his new harmonic scheme on his mind and under his fingers, and while Limehouse Blues shows that he'd already explored superimposing his changes over standard progressions, Coltrane apparently felt unsure of how to apply his new approach to Davis's new modal music.

Over the next few years, however, Coltrane would entirely modify his tactics in modal improvisation, integrating his vertical harmonic discoveries into the horizontal melodic framework of modal tunes. His live version of Impressions, a contrafact over the changes of So What recorded almost three years later, is shatteringly different from his work on Kind of Blue.

In the time between the two recordings, Coltrane had learned to superimpose Trane changes (among other things) over modal material.

Which brings me to Satellite, where the kinder, gentler chord progression of How High the Moon is gutted and tricked out with Coltrane changes. I’ve always considered this tune, recorded in October 1960 (about a year and a half after the last of the Giant Steps and Kind of Blue sessions) to be a sort of “missing link” between the Trane of Giant Steps and the “pan-modal” Trane of Impressions.

That’s because each chorus of the tune features an 8-bar modal stretch of B-7/E where Trane reveals some of his new thinking on how to blow over static harmony. This is most striking in the lengthy tag that concludes the tune — over an extended vamp on the sus chord, Coltrane explores several novel ways to approach modal improvisation, including the superimposition of Trane changes and some nearly outside playing. It’s a precursor to the approach he’d later use on tunes like Impressions.

(In a future post or two I’ll put up some Trane changes lines derived from this solo, and some further thoughts on how Coltrane plays over the modal parts of this tune. In the meantime, here’s Satellite! Get shedding, ’cuz this stuff’s going to be on the test!)

CD of the album Coltrane’s Sound

Your purchase from Amazon helps to support this blog!
Posted by Kelly Bucheger at 11:00 AM 9 comments: