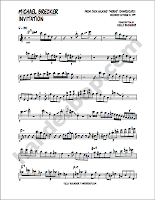 ♫ MP3 ♫
Brecker’s solo on
Invitation
When I say that, I don’t mean “I think this is a really great solo!” I mean: “This is one of the most astonishing jazz performances ever recorded.” I’ve never heard Brecker sound better than this, and I’ve heard (and loved) lots of Brecker.


Related Post
Almost 30 years ago (!!), when I first transcribed this solo — a process that involved slowly and methodically destroying the LP and my phonograph needle by playing passages over and over again at 16 RPM, dropping the speed sorta almost in half and lowering the pitch sorta almost an octave (making Brecker sound like a demonically-possessed bari player) — I’d already had a few transcriptions under my belt: Dexter, Newk, Trane, even Don Byas.

Brecker slowed down, on the other hand, sounded ... clean, perfect! To put it another way: Abnormal. Inhuman. This technical virtuosity, though certainly a contributing factor, is NOT what makes this an astonishing performance, however.

The technical mastery on display here — Brecker’s amazing time feel, his clean execution and varied articulation, his stunning facility in the altissimo, his hair-raising double-timed passages — is in the service of his varied and interesting harmonic language, and in the way he “manages” the overall arc of tension and release in the solo, building successive climaxes leading into his final chorus, where at the very end he finally lets the air out of the balloon and trails off. When it’s over, you don’t feel like you’ve been merely listening to a jazz solo: you feel like you’ve been on a dangerous ride, then safely delivered home.

That feeling of “being taken somewhere” happens in great jazz solos. Like this one.

I really have nothing to say about the double-time passages at mm. 47-53, 71-75, 89-100, and 131-140: they are, to me, stunning, in both senses of the word!
I’ve never understood why the album, which (in addition to Invitation) features Brecker’s inspired blowing on What Is This Thing Called Love, What’s New, and Freight Trane, along with stellar contributions by Randy Brecker and leader Jack Wilkins, isn’t better known — especially among Brecker enthusiasts. Part of the reason is that it was a small label with limited distribution. Although the CD is now out of print and only available at extortionary prices from some online sellers (as I’m writing this, 3 copies are available from Amazon Sellers: 2 at just under $50, and one for $90!), you can download the whole inspired thing right now for 9 bucks: