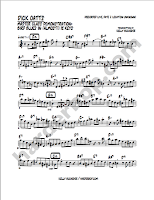 (Because this is not a commercially available recording, but is instead a "bootleg" of a master class, I'm providing an MP3 of it — Please see the NOTE at the end of this post.)
♫ MP3
Dick Oatts
Plays Bird Blues
recordingThis is a master class performance by Dick Oatts, showing what it means to REALLY be able to get around on your horn in all 12 keys. I've heard that in the class Oatts says something to the effect that he's not reallyPDF
Dick Oatts
Plays Bird Blues
transcription trying to be creative here — he's demonstrating how it sounds to have no technical limitations in any key. To illustrate this degree of fluidity, he improvises over Bird blues changes (à la "Blues for Alice"), starting in D and modulating at the end of every 12-bar chorus through the circle of fifths: G, C, F, etc.

And: it's breathtaking! In just over 2 minutes Oatts spins out an impromptu etude that aspiring jazz saxophonists (and players of all instruments) at any level can pore over and shed for a good long time.

If you want to start slow, you could treat it as a sort of "Bird Blues meets Klose" exercise, maybe play a key a day, getting each 12-bar chorus up to speed, then later chaining the whole damn thing together. That alone would keep keep you off the streets for a while.

Then, you could start to mine the many beautiful ii-V and ii-V-I patterns to be found here, grabbing the ones that really appeal to you and shedding them in all 12 keys. You could also spend quality time studying Oatts' use of approach and escape tones, the unexpected way he anticipates and delays resolutions. It's beautiful, inspiring stuff. And that's just getting started.

Before you get going, a few things to mention:

That's enough. Get to work!

NOTE: Usually I provide an Amazon link to the solo I'm transcribing. If you don't have the recording, a solo transcription is best used for wrapping fish — however, for just 99¢ each you can download from Amazon many of the tracks I've transcribed in this blog, making these transcriptions genuinely useful! You can also download entire albums, or buy CDs. This whole 21st century thing is turning out to be pretty cool.

However, for the first time in this blog, I'm providing an MP3 of the recording, because it's a bootleg and otherwise you're not going to be able to find it. But maybe I could propose a deal: if you find this track great and cool and interesting, and don't really know Dick Oatts' playing (and if you only know his [outstanding!] big band work, you don't really know his playing), then howzabout you buy a Dick Oatts CD?

I'm surprised more jazz fans don't know Dick Oatts' great quartet and quintet recordings. And in fact, I'm afraid to say it, but if you're a serious jazz alto student and haven't heard much Dick Oatts, there's a fairly good chance you might be ... a loser.

So: buy Standard Issue, Volume 1, as a CD, featured to the left, or as an MP3 download.

Oh My God what a great CD!!! I've played it so much the laser in my CD player has burned out all the pits in the disc, so now when I put it on it's just silence. (But, because it's a CD, it's PERFECT silence...) Or buy All Of Three as an MP3 download.

Holy Carp! (There's so much more: check out his other Steeplechase stuff, like for example Saxology, the quartet with Bergonzi, as an MP3 download!

Just typing about it makes my fingers tremble!)

If you're a saxophonist and Dick Oatts is relatively new to you, you've got some catching up to do...
Posted by Kelly Bucheger at 10:11 PM 9 comments: