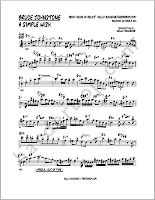 From the recording House of Relics, recorded October 9, 2011.

It wasn’t a plot: the two guys in question were Gerry Mulligan and Pepper Adams, and the fact that some newcomer from New Zealand could elbow everybody else out of the way and take the bronze — for ten years! — amid such illustrious company is, while perhaps surprising, entirely appropriate!

Bruce shared the bari podium with the two American heavies thanks to his own considerable strengths: a tart, instantly-recognizable sound, and an appealing and unhurried behind-the-beat time feel that was poised and in the pocket no matter the tempo (perhaps calling to mind Dexter Gordon — someone Bruce regularly locked horns with during his days in Copenhagen).

High school band geeks (like me!) first heard Bruce with Maynard Ferguson’s big band. Bruce very nearly steals the show on my favorite Maynard record, M.F. Horn 4 & 5: Live At Jimmy’s, whether swaggering and snarling through Stay Loose with Bruce, or battling the great Dutch tenorist Ferdinand Povel on Two For Otis, or taking an unexpected latin break on MacArthur Park!

(As one YouTube commenter put it, regarding Stay Loose With Bruce and the rest of the album: “One of the best bari solos ever recorded! I call Live At Jimmy’s ‘bari sax clinic’. Of course, I love Gerry, Pepper, Carney, et al, but this solo is just amazing. Oh﻿ yeah, I think there was a trumpet player in the band, as well.....”)

Bruce made a big impression on me. I was one of those subscribers who dutifully filled out and mailed in my Downbeat Readers Poll ballot every year — my alto-tenor-bari Holy Trinity was regularly Phil Woods, Sonny Rollins, and, of course, Bruce Johnstone! (Joe Farrell often got my soprano vote...)

Obviously, I’m thrilled to feature Bruce on my new recording, House of Relics! While I loved his work in Maynard’s band playing fiery tunes at ball-busting tempos, I wanted to showcase his kinder and gentler side: in live performances I’ve heard him prove himself to be a master balladeer, and I hoped to grab some of that for my record!

His performance on my tune A Simple Wish is all I could have hoped for: quiet, tender, and just plain lovely! I’ve mentioned elsewhere that transcriptions typically contain only about half of the “data” (at best!) that makes a solo great, and that applies here as well. Bruce’s articulations can't really be captured in musical notation: he’s a master at goosing or understating this or that note in a way that gives his lines lift and swing and momentum — Bruce’s notes are short or long or accented or ghosted in ways that defy standard notation. As I’ve done with other transcriptions in this blog, I’ve put in the “bigger picture” articulations: it’s up to you to listen to the recording and grab all the wholesome goodness that’s not on the page!

Bruce’s time feel also challenges transcription. It’s worth noting his effective use of quarter note triplets to convey the sense that he’s floating above the time, and also to provide rhythmic variety. What can’t really be expressed in notation is his groove, his habitual placement of notes on the back side of the beat. This is Big Boy & Girl stuff they don’t teach you in school. This transcription can only approximate Bruce’s free and easy way with the time — listen to the recording and play along to get a better sense of Bruce’s sophisticated approach to the pulse.

Don’t let these caveats intimidate you: have fun! Bruce’s solo in transcription is a lovely little etude with some deep musical wisdom behind it. Play along (and stay loose!) with Bruce in the recording and you’ll be getting a heavy lesson with one of the greatest and most recognizable bari players jazz has produced! 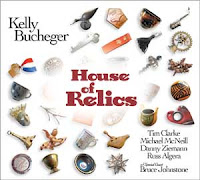 House of Relics is available on iTunes, from Amazon (CD or MP3), Bandcamp, & CD Baby.
Posted by Kelly Bucheger at 6:49 PM 3 comments: