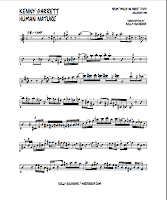 From the Warner Bros. DVD Miles In Paris, recorded 1990.

PDF
Kenny Garrett Human Nature transcriptionThis Kenny Garrett solo, from the Miles In Paris DVD recorded in 1990, has become a YouTube (and Daily Motion) classic (there's a link at the end of this post), for good reason: first of all, Kenny plays beautifully here, offering a fine demonstration of how to build a solo over a single-chord vamp. It also doesn't hurt that there's some extra-musical drama afoot in the performance: Kenny's clip-on mic wasn't working, and he's seen signaling the problem to Miles. Miles beckons him to center stage anyways, having him play into Miles' own clip-on mic, still attached to his trumpet. And that trumpet, of course, is being held by the Prince of Darkness himself: Miles becomes the funkiest and most intimidating damn mic stand you've ever seen. (It's right at this point, at the beginning of Kenny's solo, where most of the YouTubes pick up the action, but it's worth catching the whole thing on DVD...)

Garrett plays, during these unusual circumstances, inches away from Miles and his inscrutable gaze, without any apparent hesitation or ill effect, as if he and Miles do this kind of weird Miles-all-up-in-your-face shit all the time. (Who knows: maybe they did? Or maybe by the time you get to the level of playing with Miles, you're beyond intimidation.) His solo is masterful and worthy of some serious study — it's all about time-feel and articulation and harmonic resourcefulness and rhythm and building tension.

(By the way, it's also worth searching on YouTube for the Miles in Warsaw 1988 concert — if it's available commercially, I haven't found it. On that version of Human Nature, Kenny's mic is working fine. Miles, freed from his role as human mic stand, ventures to his keyboard to occasionally jab some off-the-wall, say what? chord into the mix. Kenny responds to Miles' unpredictable harmonic provocations with a solo that ventures much further "out there," into more bracing harmonic turf than he explores here, in this later outing in Paris...)

A few comments on what Kenny does here:
There's lots of other cool stuff here that defies simple classification. Check it out and play with it and have fun! NOTE: buy the DVD! But, while you're waiting for it to arrive, this solo regularly appears (and then disappears, since it violates copyright rules...) on YouTube and Daily Motion — as I'm writing this, it can be seen here: Kenny Garrett - Saxofon Solo.

DVD of Miles In Paris

Your purchase from Amazon helps to support this blog!
Posted by Kelly Bucheger at 7:51 AM 2 comments: