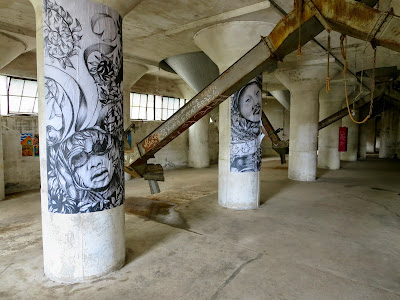 I’m performing later this week in one of Buffalo’s more unusual spaces: an old, once-abandoned grain elevator on the Buffalo River. Last week I dropped by to check out the acoustics and get a sense of how I was going to work in the space, and: Holy Crap! The sound was amazing, with the space serving as a sort of “natural Echoplex” — really has to be heard to be believed. Here's an iPhone recording — with no reverb or effects of any sort — of me working out some ideas for how to play there ... influenced by the work of John Klemmer, Paul Winter, and Minimalist composers like Steve Reich.

(This grain elevator is adjacent to the Buffalo River, and occasionally you’ll hear geese offer their frank assessment of my playing. Meanwhile, freshman students from UB’s School of Architecture & Planning were touring the site; you’ll hear them from time to time as well... More photos of the site can be found here: Perot Malting Elevator, Silo City, September 20, 2013.)

Posted by Kelly Bucheger at 8:48 AM No comments: