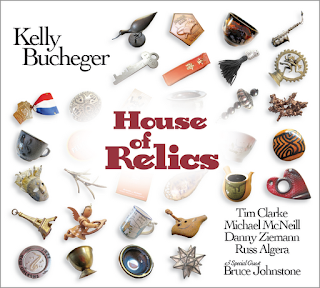 Nineteen years ago, in Minneapolis, I wrapped up a CD release weekend with my beloved group The Illicit Sextet, got into a Budget rental truck filled with everything I owned, and drove to Buffalo, New York. Life is full of surprises, of course, and this wasn’t the original plan — it worked out this way after my very talented wife, straight out of grad school at the University of Minnesota, did too well in what was supposed to be her first, “practice” job interview.

For me, it was a perverse career move. At the exact culmination of years of work developing a band and building media relationships and cultivating club owners, I did the promotional equivalent of joining the witness protection program. Later that year, a few months after I’d left and due to exuberant critical response to the recording, The Illicit Sextet was voted “Best Jazz Group” in the Minnesota Music Awards. Doc Severinsen was on hand to present the award to those members of the group who’d opted not to move a thousand miles away.

The thing that bugged me most back then — and, for what it’s worth, a whole lot of stuff was bugging me! — was that I never got to see the CD in record stores, which was something I’d really looked forward to and thought would be cool.

(Nowadays, of course, just seeing an actual tangible existing neighborhood record store itself registers a jolt of surprise... And if it has a well-tended jazz section, well ... that’s along the lines of spotting a unicorn munching grass and pooping rainbows in your backyard.)

When I left Minneapolis, I was convinced that my best jazz days were behind me, and that I'd never again play with a group at that level. I was wrong. It turns out my best days were ahead of me — indeed, I’m smack dab in the middle of my best jazz days ever RIGHT NOW, here in Bee-Yoo-Tee-Full Buffalo, New York!

In fact, I’m delighted to announce I’m releasing a Brand New CD today -- and I'm excited to report that in the aftermath, I'm actually going to stay living right here in Buffalo rather than fleeing into the night. It’s a nice change of pace.

This new CD, House of Relics, the product of nearly 2 years of rehearsing, performing, and recording with this group, features nine fresh original compositions with an amazing band.

However, if I were you, I wouldn’t bother taking my word for it (“I mean, what’s he gonna say, that it’s stale tunes and a crummy band?!?”): if you’d like to draw your own conclusions, you can actually stream the Entire Ding-Dang Thing FOR FREE on my Bandcamp site to see if it’s for you or not.

I mean, I wouldn’t want you to buy the thing if it didn’t connect. But, if it does, sure: I’d be downright tickled, tending toward euphoric, if you were to purchase it!

Here’s where you can find it:

Check it out and see if it grabs you! And drop me a line if you have any comments or questions...
Posted by Kelly Bucheger at 9:52 AM 3 comments: