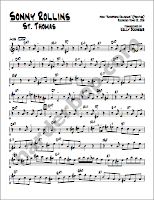 PDF
Sonny Rollins
St. Thomas transcriptionPrestige released Sonny Rollins' album Saxophone Colossus in 1956. "Colossus" is defined as "a person or thing of enormous size, importance, or ability" — therefore, I can say definitively that the album was titled with absolutely no hyperbole at all: this collection of three originals and two standards represented the pinnacle of jazz performance at that moment, and Rollins, 25 years old at the time of the recording, was indisputably The Titan of the tenor saxophone.

And yet: what always strikes me whenever I revisit this music (and I have heard it many hundreds of times without tiring of it), is how joyful, how playful (and, I will concede, devastating, in the case of You Don't Know What Love Is) this amazing recording remains.

Without a doubt it's "serious" music: Rollins displays a no-nonsense, formidable mastery of his horn and his material, and his sidemen were among the top practitioners of the art at the time.

But Saxophone Colossus, in spite of that imposing name, was also very approachable: while jazz scholars (amazingly, a few existed back then, with Gunther Schuller leading the pack here) held up Rollins' work on the album as worthy of dissertations on the art of "thematic improvisation," casual listeners could just ... dig it.

(Jazz musicians, and tenor players in particular, could not hear this album in any "casual" way, however: this was heavy music that merited study and inspired serious woodshedding. If there had been any question as to the Top Dog in the tenor world — and Rollins before this point was already a leading contender for the title — Saxophone Colossus laid to rest any doubts.)

St. Thomas is a "calypso" tune that Rollins said wasn't so much an original as it was an arrangement of a well-known Caribbean melody reflecting his familial roots in the Virgin Islands. Since its first airing here, this simple tune, whatever its origins, has become a jam session staple: it's been played, misplayed, overplayed, flayed, flambéed and julienne-fried nearly to death — so much so that it's hard to imagine that once upon a time it was: fresh, new, unusual, hip!

However, this first recording in the history of the world of St. Thomas, played by the Colossus and his mates, still sounds fresh, new, unusual, hip to my jaded 21st-century ears! As Good As Jazz Gets. And since any aspiring jazz musician sooner or later will be required, by New York State Law, to jam their own wobbly and unsteady path over these changes (with the expectation that you'll improve over time, dammit, or else don't come back), you might as well study this First, Seminal version of the thing to get a head start.

CD of the album Saxophone Colossus

Your purchase from Amazon helps to support this blog!
Posted by Kelly Bucheger at 12:36 PM